One thing we have learned over the years in business here at Pumpkin Fine Cars is that you never know who is going to walk through the door next. As anyone that works in a retail environment can attest to, every day brings a new assorted cast of interesting people from all backgrounds and walks of life. That is one of the only constants and one of the alluring facets of working in retail, whether it is food, consumer packaged goods, or in our case high quality pre-owned cars. If you consider yourself a “people person” and enjoy meeting and conversing with new and interesting people there are very few outlets in which it happens as frequently as in retail sales. 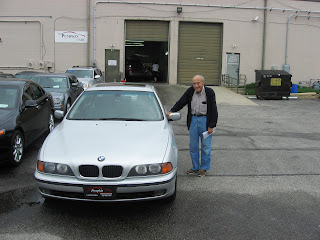 Don Taylor and his pristine 2000 BMW 528i from Pumpkin Fine Cars
We had one customer a few days ago that has a story that we felt compelled to share with our friends. His name is Donald Taylor. Donald was referred to Pumpkin Cars by a gentleman he met at while sitting at the bar of a restaurant waiting to get seated for dinner. He came in looking to have his Lincoln Towncar appraised for a trade value and Don had his eye on a pristine silver 2000 BMW 528i. After a few details were worked out, Pumpkin and Don reached an agreement on the transaction. Don was now the proud owner of a BMW 528i. Up until this point I’m sure nothing about this story seems out of the ordinary. Now, let’s learn a little bit about Don and you will see why this story really is extraordinary. Don Taylor was born in London, England in December of 1920. That is correct; Don Taylor is 89 years old. When asked what his reason was for buying a BMW he frankly and simply replied, “I’m treating myself to a BMW for my 90th birthday present.” At this point all of us in the office at once stopped, looked at each other and Don and thought, “Wow, what a cool explanation.” Don is very sharp, has a great sense of humor and was very pleasant throughout the process. At nearly 90 years old he was also willing to trade in and part with his "baby", a lovely 2002 Lincoln Towncar for one of Pumpkin's speciality brands, the world renowned "driver's car" a BMW 5 series!  He explained that he actually owned a Jaguar dealership in North London before he retired to the States. He has been married to his wife Hilda, who will also turn 90 shortly, for 68 years. 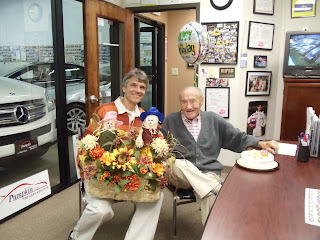 Franck Freon and Don Taylor pose with Birthday cake, balloon and gift as
Pumpkin helped Don celebrate 90 years!
When we asked Don why he came to Pumpkin Fine Cars he told us that he was referred, but after he came in initially to speak with Franck Freon, he never considered going anywhere else. Upon hearing that, we began to think about the magnitude of that statement with regards to how comfortable Don felt at Pumpkin, and how quickly we earned his trust. Now, please keep in mind that Don had worked in the auto industry; he had owned a car dealership. This was someone that knew the business and clearly knew how most dealerships operate. Think of it from your own point of view. Would you feel comfortable letting your father, mother, grandfather, etc at the age of 89 go into a car dealership alone, and not worry about them getting taken advantage of, run in circles or even being taken seriously as a buyer? In most cases, your answer would be a resounding, “No”. Well, here at Pumpkin Fine Cars, that is exactly what Don Taylor did. He got a great value on a great car and drove away as happy as could be. Where else but at Pumpkin Fine Cars can that happen? What a way to celebrate your 90th Birthday!! Pumpkin Cars is very proud to be a part of it and we wish Don and his BMW 528i many years and many miles of enjoyment together.
Email Post