As any auto racing fan certainly knows, and most casual sports fans should know, this Sunday May 30th, is the greatest of American car races, The Indianapolis 500.  Celebrating it's Centennial Era, the Indy 500 is less of a race and more of a Memorial Day Weekend Institution.  A good old slice of Americana, if you will.  For those of our readers that do not know, the owner of Pumpkin Fine Cars and Exotics, Franck Freon was a professional race car driver for 18 years.  He has raced all over the world, in many different classes and formats.  His greatest finishes came in endurance races.  He and his teammates claimed a legendary win at the Rolex 24 Hours of Daytona in 2001, beating Dale Earnhardt and Dale Earnhardt Jr..  What a lot of customers and his fans do not know is that Franck came within fractions of Miles Per Hour of qualifying for the 1995 Indy 500.  As a sports fan myself, it was very cool to get to sit and talk with Franck about his Indy 500 experience.  We talked about what it was like then compared to now, the difference between the cars, speeds and drivers. 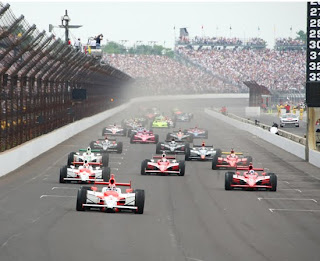 The 1995 Indy 500 was the last one before the infamous split between the IRL (Indy Racing League) and CART racing and therefore the field was packed with more talent than has been seen since (this year is the first since 1995 that the IRL and CART have unified).  Competing against such names as Bobby Rahal, Robby Gordon, and eventual winner Jacques Villenueve, Franck Freon finished "on the bubble" meaning he was the last driver left out of the Indy 500 field.  Franck's qualifying speed was 224.432 mph, which was not quite enough to make the field, but was better than legends such as Al Unser Jr and Emerson Fittipaldi who also did not qualify.  Now for those of us who have never, and probably will never drive at almost 225 mph we cannot imagine the training and mental focus it must take to do so.  When talking with Franck earlier this week he admitted that even a driver that was so highly trained and experienced as he was, not only driving, but also competing at those speeds was a pretty harrowing experience.  It was very intense, and you had to be a little crazy to even attempt it. He drove through some of the turns at 230 mph!!  Arie Luyendyk set an unofficial track record that year with a practice lap of 234.913 mph.  Currently, he explained, they have scaled back the power of the cars because safety had become an issue from 850 Horse Power in 1995 to about 650 to 700 today.  Not only was he the last one left out of the field but he came so close while driving a car that had a 1992 chassis, keep in mind this was in 1995.  We all know how quickly the technology in auto racing evolves and Franck and his team were at a definite disadvantage having a three year old chassis, but still came very very close to a start in the Indy 500. 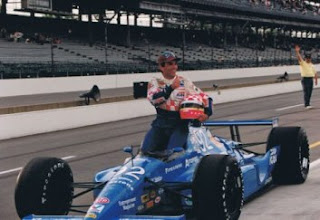 Franck spoke very fondly of his experience and recognized what a huge honor and accomplishment it was to come so close.  Obviously, as with any competitive professional athlete, he would have loved to drive in a race with such tradition and hoopla as the Indy 500.  This experience, however, did not define his career by any means because he went on to be very successful as an endurance driver.  We at Pumpkin Fine Cars and Exotics wish the drivers in this years field the best of luck and wish them a safe race.  We also hope all of our friends and customers enjoy a safe, festive Memorial Day Weekend and enjoy the race!  If you would like to speak with Franck yourself about racing, or just cars in general, feel free to visit our unique indoor showroom.  As always we can be reached via the phone at 609-646-7676 or via email at [email protected] .  You can browse our full inventory online, or in the showroom, whichever is more convenient.  Please become a Fan of Pumpkin Cars on Facebook, follow PumpkinCars on Twitter and if you enjoy reading it, subscribe to our blog.
Email Post