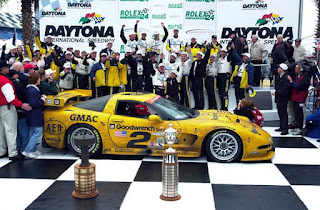 10th Anniversary for Franck/49th for Daytona

This weekend is the annual running of The Rolex 24 at Daytona.  This  car race is widely considered to be the most grueling endurance race that is run in the United States, as well as most coveted title on the domestic endurance racing circuit.  It's run on the historic road course of Daytona International Speedway and this year celebrates the 49th Anniversary.

Some notable winners of previous races read like a who's who in the racing world.  They include Juan Pablo Montoya, Scott Pruett, Dario Franchitti and legends Al Unser Jr., Al Unser Sr. and A.J. Foyt.  Of course, our own Franck Freon, who raced with all those guys, and more importantly was an integral part of one of the most historic wins of all time in this great race.
As they celebrate the the 49th Anniversary of the Rolex 24 in Daytona, we here at Pumpkin Cars in Egg Harbor Township New Jersey, along with Franck, Gina, Harrison, Isabella will celebrate the 10th Anniversary of the historic win of the #2 Corvette C5-R! Come join us this Saturday, and if he can still remember how to do it, Franck will provide autographs!!

Background on the 2001 Race:
As the 2001 Rolex 24 at Daytona approached the focus of the racing world was on the GM Corvette Racing Team.  The reason for this was that NASCAR racing legend Dale Earnhardt and his son Dale Jr. signed on to drive for the team at the Rolex 24.  It was widely considered to be a "dream team" along the lines of the NBA's Miami Heat starring LeBron James, Dwayne Wade and Chris Bosh of today.  It was also considered to be the revival of the "all star" format that the Rolex 24 is known for today.

Dale and Dale Jr. were teamed with Andy Pilgram and Kelly Collins in the #3 Corvette.  The #2 Corvette was driven by Franck Freon, Johnny O'Connell, Ron Fellows and Chris Kneifel and although the more seasoned drivers at that race, no doubt were not viewed with the same fanfare and attention as the #3 driven by Dale Earnhardt who had never before driven in the Rolex 24.

It was Franck and his teammates in the #2 Corvette C5-R that took the checkered flag and the title.  The win was historic for Corvette Racing as well because the #3 car took fourth (2nd in class) and the Corvettes dominated the field filled with Porsche, Ferrari's and a total of 89 cars!

Gina Freon recalls, "If any Pumpkin race fans have race memorabilia --- they might want to check it closely - if you have a shot of the podium with the Corvette in front of it - look throught he car to catch a glimpse if Franck's little "Pumpkin", son Harrison, at the age of 3.  He was dressed in a red "firesuit" and happy that his Papa had just won, but he was even more excited to be near the Corvette itself. He wanted to climb in and take the wheel already at such a young age - he wanted to drive fast like Daddy."

Franck does miss racing, and it's hard for him, because unlike guys who played basketball or football in college that can still play around amongst eachother on weekends or after work, racing is gone. "Car racing at the level I competed requires high level equipment, extreme physical conditioning and a track," Franck Freon shared with us at the showroom...."Trophies and champagne are nice, but the real fun came in earning them! Those were some great times for me as an athlete. Today, I have a superbe family, great employees and fantastic customers at Pumpkin. Although it is a different kind of "celebrity", I'll take it. It's wonderful. As far as endurance...I'm sure the celebrity I'm living now will last longer than the fame from even my most famous wins! I may not go as fast, but every car on the Pumpkin's lot gets a special drive from me before being sold to make sure it's in great shape and that's a pleasure for me. I'm lucky," Franck finished.
Check our facebook page and you tube pages for more from Franck this weekend!
Email Post
Labels: 2001 win at Rolex 24 of Daytona 2011 Daytona 24 Hour Race PumpkinCars Racing Remembering Dale Earnhardt Rolex Rolex 24 Daytona