I learned some interesting facts about the Indy 500 from our newest team member at Pumpkin Cars this week. He researched the race in order to have a chat with Franck about his experience at the Indy 500 in 1995. Yes, I know I am dating myself – but it seems like yesterday to me!! The discussions that followed reminded me of those days and had me telling employees and friends around the office the stories from my time there with Franck. 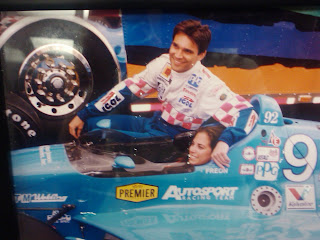 First, I wanted to share my story because several years ago while telling a random seat mate on an airplane about my “chance” encounter with my hubby, I was encouraged by the then slightly older than me gentleman to keep telling stories, especially ones that made us happy. His opinion was that sharing happy stories with others, whether they be close friends or strangers, was what it was all about. This thought made me think of the power of Facebook and Blogging, to share details with loved ones that we may have the desire but not the time to retell old stories to…Is it the dining room table of our generation? Perhaps, or maybe it’s just fun.

Well, for those of you who might like to know, Franck and I met in the fall of 1994. His Indy car career was going OK, but not great. He lacked the funds from big enough sponsors to get him great rides. Yes, in most cases the driver brings the funds to the team….Considering he learned English from living with the wonderful Martin family in California and from his own hard work along with getting friends signed on to support his sport, he also drove pretty OK. Franck was well known for being fast and not smashing the expensive equipment. He always had a delicate touch.

As for our meeting, that’s its own story. By the spring of 95, I had taken a leave of absence from my career in the health food industry with my beloved French company, Boiron. The excuse of finishing my MBA provided a much desired ability to spend six months dedicated to my new and everlasting love, Franck. I was able to sign on as his marketing girl. Really, it was such a gift to be part of a great group of people led by the phenomenally talented engineer, Steve Erickson, who named our self-formed team, Autosport. Steve and Franck and some gigantically dedicated and talented guys built the team and the car to go to the 1995 Indy 500. They had no money whatsoever. They pieced together enough dollar bills to buy a 1992 Lola chassis, long prior discarded as too outdated and used to compete at such a high level competition.
I was in charge of business cards, tee-shirts, press releases and hospitality. Keep in mind, I knew nothing about auto racing, or even cars for that matter. I knew, however, that Franck was my future husband and the father of my future kids, so I figured that would get me by for a month in Indy. My Uncle and my Brother volunteered for extra help and support! Beginning with the first phone calls, I was shocked and impressed to find out that auto racing was a high level business experience with just about every complexity that business can present being expressed and experienced as fast as the drivers can drive. Business plans don’t take weeks to pan out. They swoosh past you in a matter of minutes. Even back then, press releases were written and shot out seconds after a lap was completed. It was a great experience professionally. That was already a great start considering I was a workaholic at the time.
Yes, for those of you who only know me now, this is calmer…
Well, in any case, the guys and girls in the press room, quickly took to calling me “Mrs. Freon”, even though it was a solid two years prior to our wedding. Of course, it was my dream vacation. I didn’t find out until years later that it was probably the most stressful or toughest time in Franck’s life. “To drive at those speeds with our shaky equipment was intense,” he would tell me. "I was going flat out lap after lap and day after day, it was mentally draining like nothing I’ve ever experienced before or since," Franck said.  As his wife, I finally got it years later when I realized Franck found 12-14 hour work days or getting up at 4 am to go buy great cars in the snow after a 3 hour drive each way two days back to back was no problem at all! Franck built Pumpkin Cars from scratch himself, like he and Steve built the team for the Indy 500, with little to no funds and in the face of bigger and more powerful forces with tons of business friends/connections doing the same thing.

He and his Autosport team worked so hard to achieve his fantastic lap speeds of an average 224.432 MPH. Not that the car would have made it through and entire Indy 500, but when he was bumped from the 33rd spot to the 34th spot despite his 224+mph performance, it was devastating. With an engine whose power came mainly from the driver and his engineer, they had deserved to make it to the “show”, at the grand Indianapolis 500. This is what I think anyway. Franck is modest about his abilities and his successes, both in auto racing and today. He was a very talented race car driver and a very well-liked and respected guy on every track. I still don’t understand much of the technical things that went on that month, but I think some Pumpkin customers have had a taste of Franck’s deep knowledge of cars and their relationship to the road!!
As for the Indy 500, every year that goes by, we say private prayers for the drivers’ safety at Indy because it is such a fast and crazy race track. We enjoy the excitement from a distance and remember our time there with joy. We want to wish all of this year’s drivers a great race and to the fans, enjoy every lap!! Finally, to all the people who supported us in 1995 – we thank you. 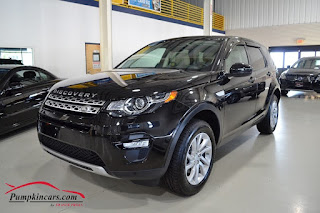